Ezekiel and Goodluck, two Maasai men from a village near Arusha guided myself, Emanuela and Sara to their hometown and eventually to the waterfall. Emanuela is also a volunteer with Farm Radio International and Sara volunteers at an orphanage in Arusha.

We started at the bottom. Arusha is an industrious city and on the busy street where we began, it seemed impossible that we would ever reach nature. We walked past the dukas that sell coca-cola and hair extensions, past the motorcycle taxis waiting for passengers, past the many vendors who know that foreigners equal money. My words felt like a song on repeat. Samahani (excuse me). Hapana asante (no thank you).

After about an hour, industrious Arusha dissolved into small villages of people farming on the mountain. Children stared as we walked past. I’m sure they had seen white people before, but we were still interesting enough for them to stop what they were doing to watch, shouting “mzungu” meaning “foreigner”.

We had made the questionable decision of attempting this hike in the rainy season. It had rained every day that week. The roads we took out of the city were made of dirt, or more accurately at this time, mud. I wore hiking boots, but the treds quickly filled with mud and I slipped my way up the path.

The road that we were taking, full of cars and motorcycles soon became a thin pathway that climbed up the mountainside. The slightly steep road became a stairway made of mud that seemed almost completely vertical. The leisurely walk became a physical battle for me.

I wanted to climb with ease, but my breaths rapidly increased and I felt my chest constrict. “Sawa?” Ezekiel asked. “Okay?”

“Sawa,” I replied, determined to pass this physical test. 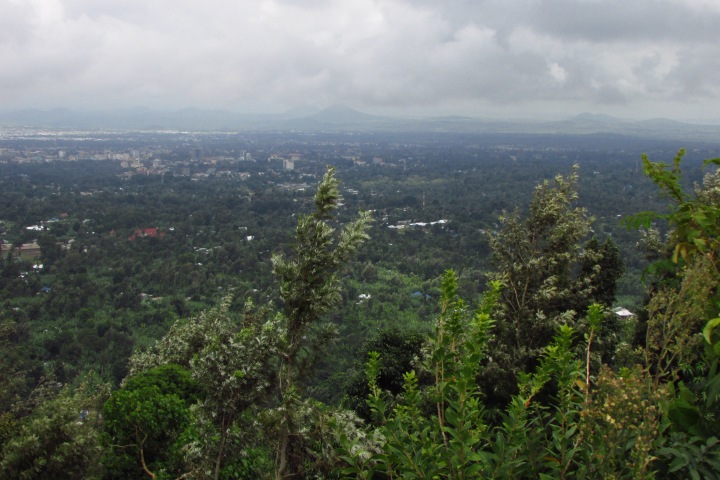 We climbed further and I looked out past the mountain. The trees and the clouds cleared and I could see all of Arusha. The village houses directly beneath us, the big city beyond and even farther to the other mountains that cradled the city. I took inspiration from this landscape to continue on, even though my body disagreed.

After about 2 hours of hiking, we reached a clearing. Children raced across the giant field to a school and church on the other side. By now my breathing had returned to normal. It was quiet and the sound of a congregation singing hymns drifted across the field. We sat down and took a break. I closed my eyes and listened to the wind and the calming voices singing a spiritual.

Goodluck paid the village so that we visitors could enter and we continued. We reached the home of Moses, who works with Sara. We met his mother, his father and his brother. We said “Shikamoo” to his parents, which literally means “I kiss your feet” and practically is a formal greeting for elders. They said “Karibu Tanzania” or “Welcome to Tanzania.”

Moses’ family home was alive with cows, goats and chickens. Inside their concrete house was a living room with large couches covered in lace. I wondered how they got the furniture up the mountain. A banner with the Canadian flag was strung across the kitchen. Outside a homemade wooden bench rested beneath a canopy of fuchsia flowers. It was a lovely home, but we had to be on our way.

We passed many family farms like Moses’, trying to guess what every plant was. We walked through a forest where every tree was at least 20 m tall. Many trees had numbers on them and Emanuela asked Ezekiel why. “The government is cutting them down,” he said.

“What do people think about that?” she asked.

Some things about politics don’t change no matter where you are in the world.

We walked past the forest along the side of the mountain, watching the fog rise through the valley. An eagle flew overhead. At the edge of the mountain, a mahogany tree rose above the river. While I have seen many old growth trees at home in Canada, this tree in this valley really struck me. 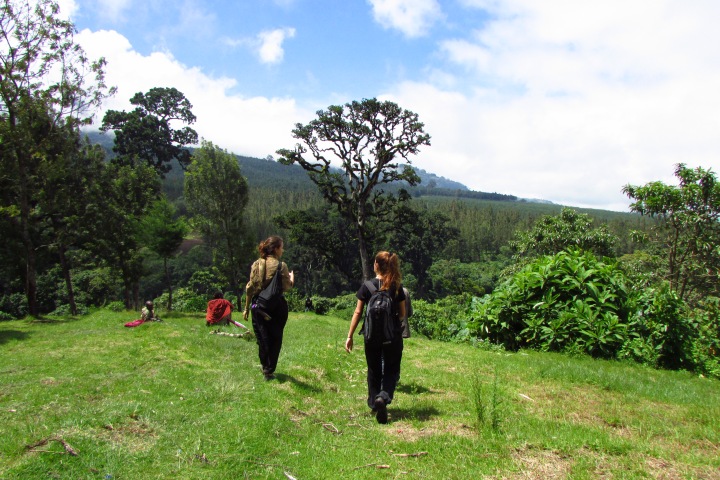 Emanuela, Sara and I started eating our lunches. We noticed that Ezekiel and Goodluck hadn’t eaten or drunk anything since we left the city. Sara offered her lunch to them, but they declined. Whether this was due to poverty, resilience, or both, I’m not sure.

Then, I realized we would have to climb back down the mountain to get to the waterfall. This climb down was just as muddy as the climb up. Children started following us and offering us their hands to help us climb down. They pointed to a small plant and said “Washa washa. Don’t touch.”

After slipping down the path, we reached the river. Clear mountain water gushed past us. We were going to walk through the river. I hadn’t realized this would be the case. I took off my socks and boldly stepped into the water in my hiking boots. My jeans and my feet got soaked, but my feet didn’t get cut by rocks.

We passed small waterfalls along the route. Soon I could hear that unmistakable, pounding sound of water being thrown from a great height. Ezekiel and one of the children helped me up over a rock as tall as me. We turned a corner and there it was.

A great, natural spout about 100 m above sent a steady stream of water below. People played in the water, jumped off rocks and dared themselves to get close to the waterfall. Mist clouded my eyes and I felt at peace.

The young boys who were so keen to guide us to the waterfall also helped us on the way back. When we got back to the pathway away from the river up the mountain, one boy told me “I must go home now.” “Kwaheri” I said “Goodbye.” But he wanted money. We didn’t know that these boys were going to be here and we hadn’t brought much small change. There were at least 15 of them in total and we didn’t have a coin or bill for each child.

I gave 100 TZS to the boy. “Use this to go to school and share it with your friends!” Emanuela told another boy as she gave him 1000 TZS. Goodluck repeated what she said in Swahili. The boys were not very happy with our tip. I felt guilty for not bringing more money with me and also powerless because even a big tip would do little to alleviate the systemic poverty.

The trip back was fast. I struggled back up the muddy mountain, collapsing onto the grass at the top to catch my breath. Soon enough I felt strong again and we continued the hike back past the forest with the numbered trees, past the church with the singers and back down through the villages.

At one point, it seemed as if the path ahead of us ended at the edge of the mountain. A herd of cattle walked in front of us as if they were walking off of the cliff into the city below. I took out my camera to take a picture.

“No! Money!” I heard. A small boy, maybe 7 or 8 years old, was watching after the cattle and watching me. I shook my head and put my camera away. Poverty may be high in Arusha, but so is entrepreneurship. Goodluck said something to the little boy in Swahili, apologizing on my behalf, I hope. We went on our way.

“Do you do this walk every day?” I asked Goodluck.

When we got back to Arusha, I had a sunburn and I was covered in mud. While I believe that I learned more about the life of many Arushans through this experience, I couldn’t help feeling like an even bigger mzungu and realizing how many people have had to overcome challenges much greater than mine.

I’m a woman of many passions, including: blogging, photography, videography, communications, hiking, paddleboarding and sharing my travels on this blog.

I love collaborating with new people. Reach me at felicity.feinman[at]gmail.com.